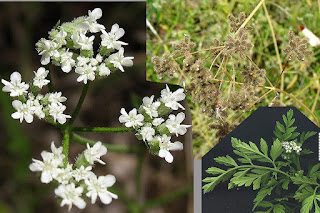 Our Texas heat has arrived so I got up early this Saturday to slog it out in the yard before the sun started beating down on me. We've had an unseasonably wet and cool spring this year, perfect for the weeds, and I needed to get the worst of them pulled before they set seed.

I've been particularly plagued by Torilis arvensis, known as spreading hedgeparsley. The Texas Invasives site has a description that just makes me laugh. "U.S. Habitat: 'This plant usually grows around waste areas, edges of woods, and low shady places' (Dixon 2011). 'The preference is full sun, mesic to dry conditions, and a rather heavy soil containing gravel or clay. Because this plant often grows in soil containing limestone gravel, it appears to tolerate alkaline conditions' (Hilty 2012)." Yep. That's my yard. I have battled it back pretty well in the front but the backyard got away from me. The nice rains and mild winter have stimulated it to epic proportions. The black swallowtail use it as a host plant, but I've yet to see a caterpillar on it. It likes to hide near my fruit trees and against the fence, which means that Penny the dog gets covered in burrs whenever she goes out on patrol. As I was yanking it out this morning I discovered a few new interesting things about my garden, and that made me think of all the other things I wished I'd never learned and the lies I tell myself about them. See if any of these ring true to you.

What would you add to this list?
Posted by Sheryl at 10:50 AM

Sheryl
I work in an office all day while dreaming about getting my hands in the dirt. The gifts my yard efforts bestow keep me sane - plus provides a nice meal for my friends and family.